Blog - Latest News
You are here: Home1 / 70th Anniversary of the end of WWII Author recounts growing up in World... 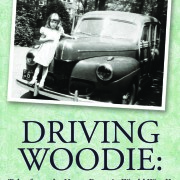 Author Martha McMullen has been telling stories of her childhood most of her life, and throughout the years, she has kept journals and notes from her stories. Unaware at the time that she was embarking on a book, Martha “Nancy” McMullen started the tales inDriving Woodiein a women’s writing circle.

Driving Woodie is about how Nancy (a young child) and her family, including a Woodie wagon, meet challenges and contribute to the home front efforts in World War II. The stories are social history, as well as a memoir, and are intended to jog the memories of older readers, and enlighten the WWII era for younger ones.

The Woodie of the title refers to a 1941 Ford station wagon that Martha’s father brought home, much to his wife’s surprise and his children’s delight. Martha, the youngest of three children, named the car “Jolly,” and it was the primary totem, not merely of her childhood, but of the family during the war. McMullen was three and a half when Jolly appeared, and her book recreates a time when the family’s excitement about their new car was only matched by their preparations for World War II. She shares with her readers what life was like for a quirky American family engaged in supporting the World War II effort.

The McMullens lived in Millburn, New Jersey, and the book is comprised of a succession of chronological segments, with the car as the constant family friend. All of the stories in this book are set in WWII with details checked for accuracy. Martha did not reflect back in the book- but rather stayed in the voice of the growing girl.

McMullen grew up and lived as an adult in Short Hills, New Jersey and New York City. She graduated from Wellesley College with honors and earned an M.A. in Psychology from the Graduate School of Arts and Sciences of Columbia University. McMullen has worked in fields ranging from research in biological psychology to computer programming. She lived in Lake Worth for 13 years, until a move to Vero Beach two years ago. She also has lived in Asheville, North Carolina.

Martha is an active community volunteer and has served on numerous Boards, including a halfway house, AAUW and Friends of the Lake Worth Library. She is also one of the founders of both the GEM fund, which provides scholarships for women returning to undergraduate education, and The Candy Maier Fund, which has created awards to women writers in Western North Carolina.

Martha has many other interests besides writing, including travel, gardening, reading, nature photography and theatre. A national level adult field hockey player for a number of years, Martha now enjoys watching her favorite sports on TV.

Martha is available to speak to groups about her book and presents tips on memoir writing.

Off the Leash party for Peggy Adams paws-itively fun