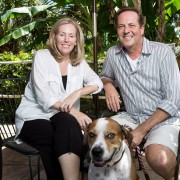 Owner of vegetarian bistro in West Palm at forefront of animal adoption initiative.

When it comes to her devotion to animals, Ellen Quinlan puts her money where her heart is.

She and her husband, Alan Gould, own Darbster, a vegetarian bistro in West Palm Beach and Boca Raton and founded the Darbster Foundation (www.darbster.com/foundation), which supports local animal rescue groups.

They are also among the sponsors of the Inaugural Countdown 2 Zero Adoption, an animal adoption event that will be held next month at the Palm Beach County Convention Center

Quinlan, who owns Pension Studio in West Palm Beach, and Gould, who has a software company, recently hosted a Countdown 2 Zero meeting at Darbster where 33 local animal rescue organizations learned more about the event and are expected to take part in it.

Additionally, the duo made a leadership pledge to Peggy Adams Animal Rescue League of $15,000 a year for five years for spay/neuter. Prior to that, they were paying the surgery fees for hundreds of cats brought into Peggy Adams.

Quinlan, 48, was raised in Boston and became a vegetarian when she was 12. The restaurants are a hobby, she said.

“When we moved here there wasn’t any place to eat (vegan), so we bought the restaurant in West Palm Beach eight years ago,” she said. They added a second location in Boca Raton a year ago.

In her spare time, she enjoys running, spin classes, tennis— and spending time with her three dogs.

Favorite places to get breakfast:

Favorite place to have lunch:

Café Sapori. They have good food and good service, and they’ll cook vegan.

Favorite place to have dinner:

Darbster, we eat there (either in West Palm Beach or Boca Raton) five nights a week. I vary what I order. Lately, I’ve been getting BLT, which is made with tempeh bacon, or tacos with toasted cumin tempeh.

If kids are involved, we take them to the Loggerhead MarineLife Center. We’re also big fans of the Norton After Dark on Thursdays and the Seafood Bar at The Breakers.

Favorite place to watch the sunrise:

On Flagler Drive between Southern and Forest Hill (in West Palm Beach). I can see it when I’m walking the dogs (a boxer, black lab and Jack Russell terrier) in the morning.