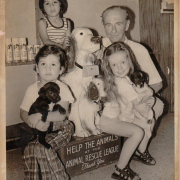 The Peggy Adams Animal Rescue League got its start like many other service organizations – a small group of women saw a problem and decided to do something about it. Really, isn’t that pretty much how every problem has been fixed since – well, ever?In 1924, Amy Lyman Phillips opened her home – porch, actually – to seven women, all of whom were concerned about the worsening plight of animals that were abandoned by winter visitors returning north. They decided to do something.A year later, the Animal Rescue League was incorporated. The organization found a home at an abandoned tuberculosis hospital on the grounds of Morrison Field. Orange crates and chicken wire – in ample supply in what was a mostly agrarian economy – became dog crates and pens. The group was up and running. Then came the deadly hurricane of 1928. The shelter was reduced to splinters, only to be rebuilt with volunteer labor and donated money.As World War II loomed, the city needed the shelter’s land to expand the airfield and offered to swap it for a larger piece of property at 24th Street and Tamarind Avenue. As news of the league’s mission spread, more donors came forward. John D. MacArthur provided money to convert the meeting room to a veterinary clinic. A bequest from Jessie Stewart paid for property on Military Trail. Catherine MacArthur contributed to build the double-dome shelter. In 1989, Charles Norton Adams funded an endowment fund in memory of his wife, Peggy. A gift from Palm Beachers Jane and Robert Grace paid to build a state-of-the-art clinic and adoption center that bears their name.The league’s fundraising efforts have grown from the down-homey tag days and bake sales to a more sophisticated year-round thrift shop and a holiday dinner dance. That event, the Christmas Ball for the Animals, is now an annual event and a major source of funding for the league.The 43rd annual Doggie Ball, as it’s affectionately called, will be Dec. 11 at the Sailfish Club. Pauline Pitt is chairwoman.“Because of the compassion and continued generosity of four generations of island residents, the League has touched the lives of hundreds of thousands of pets in one way or another,” says Rich Anderson, executive director and CEO of Peggy Adams Animal Rescue League. “We are extremely grateful for the community’s support, allowing us to continue our life-saving mission.”