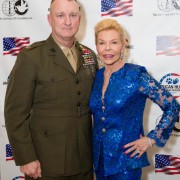 A new collaboration between the U.S. military and the American Humane Association — a partnership that began a century ago — was launched locally with a cocktail reception at Cafe Boulud.

In addition to cocktails and hors d’oeuvres, the evening included the announcement by association president/chief executive officer Dr. Robin Ganzert of the Center for Military Affairs in Washington, D.C. The center will be named the Lois Pope LIFE Center for Military Affairs in recognition of its benefactor, a longtime supporter of the American Humane Association and America’s veterans.

The center’s programs include K-9 Battle Buddies, which reunites military dogs and their battlefield handlers; Wags4Patriots, which provides returning veterans in crisis with service dogs; Operation Purple, which sends therapy dog teams to summer camps for children with a deployed parent; and Red Star Warriors, which sends volunteer veterans to assist at the scene of natural disasters, terror attacks and major animal cruelty cases.

The reception also included the presentation to Lois Pope of the Champion of Military and Veterans Award by country music legend Naomi Judd.