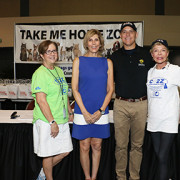 From their first purrs, Cornea, Spleen, Heart and Larynx faced obstacles, but they encountered heroes, too.

A Palm Beach County Sheriff’s deputy discovered the 4-week-old kittens outside a house and delivered them to Peggy Adams Animal Rescue League. One of the West Palm Beach shelter’s foster families cared for the wee litter mates until the babies grew big enough to be spayed and neutered.

And on Saturday at Palm Beach County Convention Center, the kittens captured the hearts of adopters like Boynton Beach’s Button Kraft, who was clearly smitten with the soon-to-be-renamed Cornea. “Look at her little face. You can’t stand how cute she is.”

More than 800 dogs, cats, rabbits, guinea pigs and parakeets lured thousands of humans to the Countdown 2 Zero event, presented by the Lois Pope LIFE Foundation, and hosted by Peggy Adams and Palm Beach County Animal Care and Control. In its second year, Countdown 2 Zero brought together 30 rescue groups who share a single goal: eliminating the euthanasia of animals in Palm Beach County by 2024.

When welfare organizations collaborate, the benefits multiply, said Rich Anderson, executive director of Peggy Adams. “We want to unite all these local groups to solve the problems in our community, which is we’re seeing too many dogs and cats euthanized.”

Some of Saturday’s participants seemed to be a tough sell. Take the brindle-coated Kermit, who snoozed on a bubblegum-pink towel while Anderson talked up the 32-pound pup.

“Kermit has trouble walking, but he’s the sweetest thing,” Anderson said. “We’ve spent a lot of time with that dog, but he’s ready to go home. He’s a good example of a dog worth saving and adopting.”

As the hours ticked by, multiple stories of successful matches emerged.

Slow-moving dogs with muzzles gone white got lucky. So did a couple of blind canines, sedentary older cats and a bunny named Kimchi. (Fear not, Cornea’s siblings found forever homes, too.)

All told, 228 animals passed through the venue’s “Take Me Home” zone with their adoptive parents. That was down from last year’s total of 313 adoptions.

As volunteers began crating animals forced to return to various shelters, news came that Kermit would not make the trip back to Peggy Adams.

A Boca Raton man and his daughter had fallen for the pooch, promising him a new leash on life.

WANT TO ADOPT A PET?

To learn more about Countdown 2 Zero and each of the rescue groups involved, go to countdown2zero.org.

For a gallery of photos from Saturday’s event, go to PalmBeachPost.com.