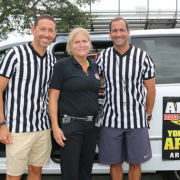 Coordinated by SADD sponsor Maureen Witkowski, the students, visiting various stations in three waves, learned how a few easy precautions can make the difference in situations where accidents can be fatal.

“I don’t like funerals of teenagers,” Witkowski said. “I don’t want to be at any funerals of anybody sitting here. So, [we have] interactive ways for you to understand that, first of all, driving is a privilege, and there are certain things that can decrease your chances of being in an accident that we’re going to be discussing today.”

She introduced the event’s guest speaker, an identical twin whose life changed in an instant.

Emily Slosberg, CEO of the Dori Slosberg Foundation (www.dorisaveslives.org), stressed to the students the need for speaking up and how one small decision can change a life forever.

Slosberg and her twin sister, Dori, daughters of State Rep. Irv Slosberg (D-District 91), got into a car one night with other teens. Nine teenagers piled into a two-door Honda Civic, she told the students, and only four survived.

Slosberg pleaded with students to speak up if they had any concerns about someone’s driving, to always wear a seat belt, and to always be careful.

“I was lucky enough to have a twin sister, Dori. Growing up, we did everything together. We shared clothes, we shared a bedroom, we talked about everything… there was never a day that we were apart. She was a built-in best friend,” Emily recalled. “Let me tell you about what happened that changed everything.”

Slosberg told the students about a Friday night one February, when she and her sister were having a fun time at a bowling alley in Boca Raton. They were approached by a 19-year-old guy who asked if they wanted to go to a party. Emily and Dori Slosberg and their friends went with the guy and his friend.

“The guy almost flips the car, and I’ll never forget looking into my twin sister’s eyes and everybody else in the car — we all looked scared, but nobody says anything. About 10 seconds later, he goes over the curb, head-on straight into another car,” she said. “As a result, the seven of us in the back fly out. The driver and the friend, who are wearing their seat belts, they’re fine — minor injuries. The car we hit had three people all wearing their seat belts — minor injuries. The seven in the back, five are dead, including my twin sister. I am the walking survivor.”

There was only one other unbelted survivor.

“Maribel — my friend — she’s a quadriplegic,” Slosberg recalled. “She sits in a wheelchair to this day. She can only move her right arm, and she breathes on a respirator. She has not been able to move a leg in the last 19 years.”

Immediately after the accident, when Slosberg was in the hospital, torn up, bruised, battered and in more pain than she could ever imagine, the worst part, she said, was not seeing her sister. After writing to her friend, her grandfather, and then her father — she couldn’t talk, she was on a respirator — she was given a newspaper.

“So I read in the newspaper that my twin sister is dead,” she said. “Everything changed from that moment. It was so surreal.”

In critical condition, Slosberg wasn’t even able to attend her sister’s funeral.

“My twin sister will never get to graduate high school, she’ll never get to go to prom, she’ll never get to go to college,” she said. “I’m here to tell you that, in her honor, stuff like this can happen. I’m real. I’m a real person. I’m not made up, I’m not an actress. It happened to me… drive carefully. Wear your seat belts. Don’t text and drive. Don’t drink and drive. Pay attention. If you’re in a car with people and you don’t think it’s cool, speak up and say ‘slow down.’ In a flash, that’s all it takes. One bad decision, one bad choice.”

“Emily’s story is enough for you to hear about the things related to unsafe behaviors. Seat belts save lives,” he said, before taking the students outside to explore the various demonstrations and activities.

Attorneys Scott Murray and Jason Guari, who sponsored Battle of the Belts, moderated an activity where students were timed getting into vehicles — donated for the day by Arrigo Dodge — and buckling their seat belts. The students, in groups of four, cycled through each position in the vehicle in a quick race to emphasize just how fast and simple it is to buckle up a seat belt.

FedEx drivers came from as far as Tennessee and Kentucky to participate in the day’s activities, Witkowski said.

For one of the demonstrations, students climbed up and into a truck and were asked if they could see a car, a minivan and a person’s feet, from various angles. For those 5-foot-5 and shorter, raising the seat height made quite a difference; otherwise, seeing over the wheel 20 feet or less directly ahead was challenging.

Students simulated driving while impaired, with “beer goggles” and “high goggles,” as they navigated an obstacle course. Driving golf carts without the goggles first, students were able to notice just how much of an impact driving while impaired made to their accuracy and ability to control the vehicle.

Florida Highway Patrol officers talked to the students about safety laws, specifically noting how important it is to slow down and move over a lane for any safety vehicle. FHP Trooper First Class Robert Guzman demonstrated the scales used to weigh trucks and explained some of the unique gear and situations that FHP officers encounter daily.

The Palm Beach County Sheriff’s Office taught students about dogs that are used to sniff out contraband.

More than 700 students attended the event Wednesday, which Witkowski thought was a great showing of enthusiastic students.

“There was a student who just died in a car accident in The Acreage, and we want to educate students so this doesn’t happen again,” she said. “Remember, wear your seat belt. Don’t drive distracted, which means eating, changing the station, texting and talking on your phone. Be safe, because every life has a meaning.”

To join SADD at RPBHS, the first step is to talk to Witkowski. Committing to be alcohol-free and drug-free in high school, and signing a contract, is the second step students must take to join SADD. To learn more, visit www.floridasadd.org.