Blog - Latest News
You are here: Home1 / Why did National Enquirer heiress spend $10 million on a memorial? 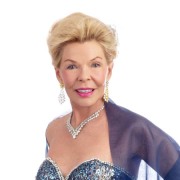 The idea and a significant contribution came from Lois Pope, the Manalapan philanthropist who has lent her name and financial support to a wide number of causes in Florida and around the world.

The two-acre site features a memorial of granite, bronze and glass, showing images of Americans who returned from war forever changed.

As a Broadway actress in the 1960s, Pope performed for military returning from Vietnam. She remembers the day she walked into a hospital room of recovering veterans.

“It was jammed with young men lying on gurneys, toddling on crutches and amputees in wheel chairs,” Pope, now 81, said Friday. “I saw young men— disabled veterans — burned so badly that they had no noses, no ears. There were sockets where eyes used to be.

“I was absolutely shocked. Then a piano started to play, and I nervously began singing,” Pope remembers.

She sang “Somewhere” from West Side story. When she got to the lyric, “hold my hand,” she reached for a young soldier’s hand.

“He had no hand for me to hold,” Pope said. “As I left there, I promised God and I promised myself I would do something for them.”

More than a decade later Pope traveled to Washington to see the name of her 21-year-old cousin on the wall honoring veterans who died serving in Vietnam. She watched as a man missing limbs struggled to place flowers near the name of a comrade who had died.

When she left the wall, Pope asked a park ranger where the memorial was for disabled veterans. She learned there was none. Pope vowed to change that.

Sixteen years later, the American Veterans Disabled for Life Memorial will be dedicated Sunday at a ceremony in where President Barack Obama will speak. The memorial’s design features a star-shape fountain embedded in reflecting pool. A flame calls to mind injury, loss and renewal, according to the designer. The water around it is meant to signify hope springing from adversity.

The memorial is a testament to the estimated 4 million living disabled American veterans.

The foundation raised about $80 million from more than 1 million donors. Pope donated $10 million herself, and estimates she raised another $8 million to $10 million more. Pope is heiress to the National Enquirer fortune, which she inherited when her husband, Generoso Pope, the tabloid’s founder, died.

The memorial’s location – about 1,000 feet from the U.S. Capitol was important to her.

“I want our elected representatives to know about the human cost of war,” she said. “I want them to think twice.”

Raising money for the memorial was not easy, in part because so many Americans seem oblivious to the struggles of disabled veterans, Pope said.

“It might seem easy for me to call on a few of my wealthy friends in Palm Beach. It just didn’t happen that way,” Pope said. “One lady said: ‘well they volunteered didn’t they?’ In other words it’s OK to come back without arms and legs.”

The largest contributions, Pope wants people to know, came from disabled veterans and organizations representing them. The donations arrived sometimes in $5 and $10 increments.

“I want this memorial to be a call to action to give these veterans the care they need, deserve and have earned,” Pope said. “I want people to know these are unsung heroes. And by golly, on Sunday, they’re going to be unsung no more.”

80 dogs rescued from hoarder in Jefferson County; Some finding homes in Palm...