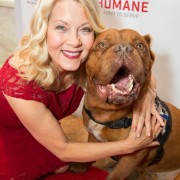 “For thousands of years, mankind has had a special relationship with dogs, and the American Humane Hero Dog Awards are our way of honoring the best of our best friends,” said Dr. Robin Ganzert, president and CEO of American Humane. “The ‘Hero Dogs Award Gala Luncheon’ is an inspiring afternoon when we offer our thanks to so many of our greatest heroes — from service dogs who improve our lives to military hero dogs who fight alongside our troops and defend our freedom.”

Dogs that will be in attendance to be honored include:

•Hooch was terribly abused, but his spirit of forgiveness led him to serve as a therapy dog for abused, autistic and special needs children. He uses great gentleness, patience and kindness to help them. For his heroism and good works, Hooch was named the American Hero Dog of 2016.

•Mango, a paralyzed rescue who was homeless, was hit by a car and scheduled for euthanasia. Now, with the help of a tiny wheelchair, she inspires disabled veterans with physical disabilities. For her work and bravery, Mango was named the nation’s Therapy Dog of the Year.

•Hook, the country’s Hearing Dog of the Year, is a 12-pound, 10-year-old dog who goes almost everywhere with his handler. Three years ago they were in downtown Sacramento crossing a street when a train came. Hook pulled the handler from the track, and the train missed her by a foot.

•Gander was rescued from a Colorado shelter and trained as a service dog. He went on to save the life of a veteran suffering from invisible but deadly wounds of war. He travels the United States to teach people about preventing veteran suicide and has raised $1 million for veterans’ groups, veterans, service dog charities and individuals in need. For his lifesaving work, Gander was named Service Dog of the Year.

“We should never forget that some of America’s bravest heroes come on four legs, and we need to pay tribute to their remarkable work and achievements,” said philanthropist Lois Pope.

In addition to the four-footed stars, “American Idol” star Katharine McPhee will be in attendance, along with the Alex Donner Orchestra. Beth Stern and James Denton are event co-hosts.

The cost to attend “Hero Dog Awards Gala Luncheon” is $325.

For more information about the luncheon and other animal-themed community events, call Mari Harner at 561-537-5887 or marih@americanhumane.org.

He once lived behind a building. Now he’s getting a college degree.
Scroll to top