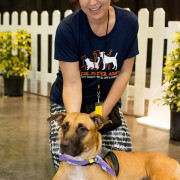 The couple met online on match.com 12 years ago. Chance lived in Orlando and Browne in Wellington. After talking on the phone for two months, they felt they felt they knew each other pretty well.

After that things began to slide into place.

“I had been running my business (Lorrie Brown Interiors) for 10 years when I met him,” said Browne. “He was in sales when we got married then he went back to grad school. When he was done my business had grown so much.”

Browne needed a hand, and Chance was the perfect applicant.

“I’d never found anyone that I thought would add value and connect with my clients until I met Tim and he was a natural,” said Browne.

But what may have sealed the deal was a certain animal attraction. Browne knew Chance was the one when he passed the Emma test.

“I had a Weimaraner named Emma I had gotten before I met Tim, the only guy I ever dated that she loved, so I knew he was good,” said Browne. “When she passed away suddenly seven years ago, the house was way to quiet. Tim gave me the space to see when I would get a new dog.”

Together they adopted another Weimaraner, Roxie, from a puppy mill in Kentucky who would have been euthanized if she not been rescued. Apparently she was no longer a productive breeder.

This proved to be an eye-opening experience that prompted the couple to learn more about animal welfare and they decided to become more involved. Browne spent the next three years volunteering at a local limited admission shelter learning about rescue. She helped introduced an ordinance in Wellington that banned the retail sale of dogs and cats that passed in January 2014.

Last year Browne began volunteering at Palm Beach County Animal Care & Control and Chance joined her in January. The couple, along with other dedicated volunteers helped make a play group program that had been newly implemented at the shelter a more regular part of the dogs’ enrichment.

Chance has become such a believer, he went onto become a play group leader and is now helping the folks at Peggy Adams develop play groups there.

“The benefits we’ve seen in the last seven months at Animal Care & Control is really incredible,” said Chance. “You’ll see a dog that is shy and unsure of himself and after two to three play groups then becomes very adoptable.”

Chance explained that some dogs that are considered to be a little too aggressive for play group are actually isolated but in an area where they can safely watch the play group. Then they are brought into play group, where other dogs basically teach socialization skills to their peers. Because of this, somewhat anxious, anti-social dogs can become socialized and therefore adoptable – a life saved.

The couple has also become Adoption Ambassadors where they take a dog from Peggy Adams and bring it into their family, further socializing the dog. Chance said that it speeds up the adoption process. When the couple takes it out in public places, the dog wears a vest letting people know that it’s up for adoption.

For Browne it’s a win-win. They not only find a home for the dog, but usually it’s through some connection, through friends or on social media.

“We get to choose the home,” said Browne. “We’re having a conversation with the adopters, meeting them in person and allowing them to interact with our foster dog, sharing their habits, their personality. The last two dogs were adopted by friends of friends. Afterward they friended us on Facebook and we get to see the dog in the new home.”

The couple’s latest effort is a big push to help make the Second Annual Countdown 2 Zero event achieve its goal of being the biggest one day adoption event in the County – the goal: finding homes for 500 pets – dogs, cats and guinea pigs.

For more information about the event, visit www.countdown2zero.org.