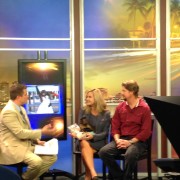 WEST PALM BEACH, Fla. – Crystal, the monkey who has starred in films like “The Hangover” and “Night at the Museum,” stopped by the WPTV NewsChannel 5 studio on Thursday, January 22. Get to know Crystal in the video above!