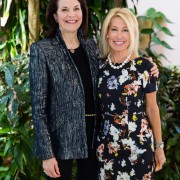 In her time in Hollywood, as a producer and as the first female head of a major film studio, Sherry Lansing was responsible for developing and distributing more than 200 films, telling memorable stories like “Fatal Attraction,” “Indecent Proposal,” “Forrest Gump,”“Braveheart” and “Titanic.”

But she’s spending the second half of her life telling a different sort of story — one literally about life and death.

“I think I was 40 when my mother died, and unfortunately I got a very quick education about cancer as I watched her suffer,” Lansing, the former CEO of Paramount Studios, remembers. “She was diagnosed at the beginning, and when she passed away, I thought that the only way to honor her memory was to raise money for cancer research so that no one else suffered like she suffered.”

She will share the benefit of that hard-won education as the keynote speaker for Monday’s “Time Is Of The Essence” luncheon at Mar-A-Lago, sponsored by Hearing the Ovarian Cancer Whisper (HOW).

“I started out as a patient advocate, to raise money for research and find a cure. I was 40 when she died, and today I am 71,” Lansing says. “My passion for it is just as strong, and for all concerned. All cancers are connected. (An advance in) lung cancer might lead to a breakthrough for ovarian cancer.”

Advocacy is so important, Lansing knows, as someone who’s lived through it with her mother. She knows that “when you’re diagnosed, it’s so scary, so frightening. You almost don’t hear what anyone is saying. You do research and reach out to the doctor and make sure you are getting the best care for your particular kind of cancer.

“I think all of us have to be an advocate, because cancer touches everyone in some way … We want to make cancer a chronic disease, something that’s been done with so many diseases like polio.”

While the Sherry Lansing Foundation cites cancer research as a focus, it also seeks to create what it calls “encore career opportunities.” She laughs approvingly about the recent “The Intern,” featuring Robert DeNiro as a 70-year-old retiree who returns to the workforce as the assistant for a much-younger female executive.

“That’s a wonderful movie. I have noticed that people, when they turn 55 or 60 or whatever it is, no longer want to retire. They want to be relevant, have meaningful work, paid or unpaid. A segment of the population is being overlooked, being ignored. Ageism is alive and well. Since I left Paramount at 60, I was in the demographic that wants to redefine aging.”

Lansing believes that her generation is uniquely geared for such a proactive plan, as “the generation that marched for civil rights, for the women’s movement. For instance, there’s a shortage of math and science teachers. If you’re young and just graduated from MIT, (schools) might not get you if you’re getting offers of other jobs of $100,000. But when you’re 60, and you already had a successful career, you might love it. A light bulb really went off for me. It’s about how to take this segment who is healthy, living into their 80s, and redefine what a third chapter looks like … boomers are not going quietly in to the night.”

That flexibility and insistence on forging her own path is what made Lansing’s trailblazing possible. Growing up “when there really weren’t any film schools,” her education became sitting in movies every weekend and “getting lost in the magic.”

The easiest way into the business that she could see was as an actress, a path not destined to be long because “first of all, I had no talent, and even more than not being talented, I felt uncomfortable being someone other than myself. I was lucky enough to get cast in a John Wayne movie, and I looked around the set and thought ‘What are all these people doing?’ I never felt good about it.”

Fortunately, Lansing discovered there was a different path behind the camera, beginning with “reading scripts for $5 a script” and then slowly rising up the ranks.

She says that even as the first female studio head, she believes that gender is less an obstacle than the sheer lack of positions available “in a very hard business with a small number of jobs. It requires talent and hard work, and it requires luck.

“We used to call it that the movie god has to shine on you. When I left there were more women than men in that business, but that’s not true anymore. I can’t explain that. It’s just very hard.”

As a producer, Lansing made two of the most controversial movies about sex and relationships of the late 1980s and early 1990s: “Fatal Attraction,” where Glenn Close’s career woman starts an obsessive affair with Michael Douglas’ married executive, and “Indecent Proposal,” where millionaire Robert Redford offers struggling couple Demi Moore and Woody Harrelson $1 million for a one night with her. She shares some of her memories here.

“Indecent Proposal”: “I remember how excited I was to work on it, working with (director) Adrian Lyne again. I will never forget sitting in the corner of shooting one day, watching the pool scene, where Redford delivers the line ‘I’ll give you a million dollars for one night with your wife.’ In my mind, when I read the script, I thought he would make it very dramatic, but he just threw it away. And I thought ‘That is brilliant acting.’ It was so casual, and that made it chilling.”

“Fatal Attraction”: “That’s very near and dear to my heart. Everyone identifies with one side of the triangle, no matter what. It’s about how actions have consequences. We used to think of the Glenn Close character, who slept with one married man too many, (as the villain) but I had seen too many men who felt ‘Well, I slept with her, too bad.’ I would say ‘Aren’t you ever going to call her?’ and they’d say ‘It didn’t work out, let’s be friends.’ But there are people involved. That line ‘I will not be ignored’ was, in many ways at the time, not received well by feminists. I really understand it as her standing up for her rights. I’m not saying she should have boiled the bunny. But now people view her differently.”

Sherry Lansing will speak Monday at the “Now Is The Time” luncheon for Hear The Ovarian Cancer Whisper (HOW) at Mar-a-Lago Club, 11:30 a.m.

Howie Mandel Opens Up Ahead Of His Performance At The Mar-a-Lago Club In Palm...