Blog - Latest News
You are here: Home1 / He once lived behind a building. Now he’s getting a college degree. 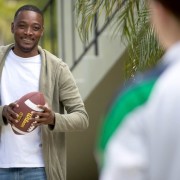 (Photo) Lanorris Lester mentors Ari Morales, who lives at Vita Nova in West Palm Beach. Lester gives back to the program that helped him when he had no place to live. (Allen Eyestone / The Palm Beach Post)

Lanorris Lester isn’t sure about this.

Even as he sits here, tie perfectly tied, pants perfectly pressed, ready to tell his story, his smile’s a little nervous, his laugh genuine though still a little hesitant. But here, in the comfort of the place he used to live, he feels somewhat comfortable talking about it, that pain that led Lester here and the things he learned that helped him move on.

He knows that the words he says won’t just stay in this room. People are going to read them. They’re going to know about his situation, or at least the one he used to be in, and maybe that’s going to change how they see him. He wants to do it, wants to say those words, because their reality helped changed his life. Saved it, really. And he thinks that by saying those words, he might save someone else.

“I was homeless for about a month. It was terrible,” says Lester, who at 19 found himself living, for a month and a half, in the alley behind West Palm Beach’s Salvation Army, until he found his way to Vita Nova, a privately funded nonprofit organization that for the past decade has helped young people like him bridge the gap between adolescence and adulthood.

“They’re exposed to so much, see so much,” says Vita Nova CEO Jeff DeMario. “They should be focusing on school but they’re looking for how to eat. If Lanorris was my kid, what would I want for him? What would be his options?”

Many of the young adults who’ve lived at Vita Nova’s residences since 2006, and been through its training and life skills preparation programs, aged out of foster care with Florida’s Department of Children and Families (DCF), never finding that “forever home” with loving, permanent parents.

Others, like Lester, now 28, simply needed somewhere to go, having spent the period where other kids are choosing colleges and picking out their first cars worrying about what they’re going to eat. Where they’ll sleep.

Vita Nova, based in West Palm Beach, provides help with education and employment, but also with skills like cooking and cleaning, and money management. Lester says such advice was rare “growing up in the ‘hood, when your role models were drug dealers. The guidance was good, to get a different perspective. A lot of people are doing good in here. It was a place to get to know each other, because we all have homelessness in common. We come from the same experience. “

Most of the residents at Vita Nova, which has the capacity for 28 residents in 12 three-bedroom apartment units, are between 18 and 25, DeMario says. The issues of youth homelessness are particularly striking in a place like Palm Beach County where the average one-bedroom rental home costs nearly $1,300 a month, and even the financially secure “experience the instability of housing prices” and a struggle to come up with necessary deposits and credit.

The situation is even more crucial for kids like the ones Vita Nova serves, about 60 percent of whom are former foster kids. In 2014, Florida gave kids in foster care the option of remaining in care until the age of 21, but for many kids with possible tenuous community connections, little experience supporting themselves and few people to coach them through that, even that extension isn’t enough to give them what they need to be self-sufficient.

Covenant House, a national organization dedicated to helping homeless youth, estimates that 20,000 kids age out of foster care in the United States every year, and that an estimated 40 percent of them become homeless.

He adds that there is a growing issue with the significant population of homeless youth who identify as LGBT, which DeMario says is about 40 percent of that population, who “have come out to their parents and are now homeless.”

“A lot of older foster kids just become homeless. The numbers are staggering,” he says. “They were never taken care of or they grew out of the system.”

One of those former foster kids is 18-year-old Ari Morales, who has been at Vita Nova for about seven months. He’d gone into the system when he was 17, because “it wasn’t working” with the relative he was living with. Morales found himself in a group home at the age of 17, where he stayed for about eight months. He was referred to Vita Nova by case workers as he was preparing to head out on his own.

“I wasn’t sure what I was going to do,” he says, “but I wanted to do something with myself. I graduated high school after I got here. I wouldn’t have been able to do that if not for here. This has helped me on a path that was different than I would have been on.”

Morales’ story is familiar to Lanorris Lester. After leaving his mother’s home because of issues there, Lester lived with a series of relatives until he was 19, not long after graduating from high school, which he’d struggled with because of the precariousness of his housing. He stayed out of trouble, but things weren’t going well.

His final living situation ended with a dispute that resulted in “them kicking me out,” leaving him with nowhere to go and sending him to that space behind the Salvation Army. DeMario says it’s a common place for young homeless kids who are still trying to maintain some normalcy, being able to use the showers and change clothes inside.

Lester lived behind the Salvation Army until doing so made him so sick “that I got hospitalized.” With nowhere to go, he got in touch with someone who had also been through Vita Nova’s program and told him “that they helped folks with housing and jobs, and if you needed food.”

Everyone that Vita Nova helps doesn’t immediately move in. Elizabeth Smiley, director of Vita Nova’s OASIS (Outreach, Advocacy and Support for Independence and Self-Sufficiency) program, says that for some kids who’ve been on the street, trust is hard to come by, surviving in a world where “their first instinct is to believe they’re being used. That’s what they know. Sometimes they just come to take a shower or get something to eat. They’re not used to having a home life.”

While transitioning back into a structured situation is difficult for some formerly homeless youth, for Lester, the rules “made it easier. That was what I needed. Some people fight help, because it can come back to bite you. I learned that early. But it was easier to do this that way.”

He says that he thrived in the structure and support of Vita Nova, enrolling in classes at Palm Beach State College and “getting comfortable” with the idea of being on his own. When he eventually left about a year and a half later, he moved in initially with a girlfriend, but learned the hard way that nothing is in your name, “when the relationship goes, the house goes,” says the now-wiser Lester.

But that’s where “the skills that they taught me” kicked in and the now self-sufficient Lester, who has done everything from working as a bellman at the former Ritz-Carlton hotel in Manalapan (now the Eau Palm Beach), and parking cars as a valet on Clematis Street, picked himself up and kept moving. He’s currently finishing his degree at Palm Beach State.

“You can always go through a phase when you feel sorry for yourself,” he says. “But now I know you better put something in your name.”

That’s the kind of advice he’s been able to impart to current residents at Vita Nova, like Morales, to whom he’s a mentor. Sometimes they talk, and sometimes “we just work out” and say nothing at all, Morales says. “He’s a good person to be around,” Ari says of his friend. “I never had a mentor before. He keeps me staying focused.”

“I don’t try to make them feel like they’re talking to an adult,” Lester explains. “They can get comfortable and tell me stuff,” he says.

DeMario says that the average resident stays around two or three years, gaining support and skills to help them move on and become self-sufficient. Some will move into their own places, or in with friends, or get married – “We have some who leave here and move in together,” he says. “If you can reach one person, it makes the job worth it.”

Now living in West Palm Beach with his sister as his roommate, Lester says he’s grateful to Vita Nova, not only for shelter, but for the confidence to know that he’s going to be OK.

“The decisions you make now are important,” he says. “It’s crunch time. I’m not saying I’m different than other people but I’m making better decisions. I know the path to take. I’ve been there, at a place that’s much deeper.”

And he doesn’t regret telling people like Morales- and now all of you – what he’s been through, if maybe it helps them not be there in the first place.

“I look at him and he’s like a little brother,” he says. “It’s heartwarming to be able to help him.”