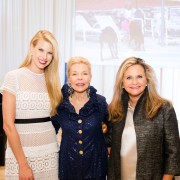 More than 400 people gathered at The Mar-a-Lago Club to salute America’s bravest heroes on both ends of the leash, including Harley, a 15-year-old, one-eyed Chihuahua who was named American Humane Association’s 2015 American Hero Dog. Harley served as a “voice” for the thousands of dogs confined to puppy mills across the country.

“For thousands of years, mankind has had a special relationship with dogs, and the American Humane Association Hero Dog Awards are our way of honoring our best friends,” said Dr. Robin Ganzert, the organization’s president and chief executive officer and executive producer of the Hero Dog Awards on Hallmark Channel.

14 dogs brought to West Palm Beach after raid in Arkansas