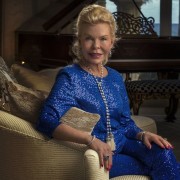 “War is not over when the shooting stops,” says Lois Pope. “For disabled veterans, the sacrifice goes on.”

On Tuesday night, the day before Veterans Day, a Ric Burns documentary underwritten by Pope will be an unflinching reminder of the cost of war paid by the country’s 4 million disabled veterans.

Called “Debt of Honor: Disabled Veterans in American History,” the one-hour film continues the mission Pope began more than 20 years ago when she began lobbying for a disabled veterans memorial in the nation’s capitol.

In October 2014, President Obama helped dedicate the memorial that Pope raised $81 million to build. Pope contributed $10 million of her own money, she said recently from her waterfront Manalapan home, as a few of her 10 cats and dogs played on her dining-room floor.

Pope, the widow of National Enquirer owner Genoroso Pope, is an animal lover who frequently flies animals in danger of being euthanized to no-kill shelters in Palm Beach County.

‘Debt of Honor’ looks at the history of disabled veterans in America. It airs Tuesday, November 10, 2015 on PBS stations.

But her overriding passion is for America’s disabled vets who have returned from war missing limbs, with post-traumatic stress disorder, and with traumatic brain injuries.

The Washington, D.C., memorial was six months from being finished when Pope realized her mission was not.

She contacted six-time Emmy-award winning filmmaker Burns saying she wanted to fund a documentary that showed how the treatment of disabled veterans has changed over the country’s history and how much more could be done.

“I’m so grateful to Lois, for her right-between-the-eyes way of talking, for being direct and saying, “So, what about it, buster?,” Burns said. “Talk about putting your money where your mouth is.”

Burns wants his film to open Americans’ eyes to what disabled veterans are enduring. Thanks to modern medicine, soldiers who once would have died on the battlefield are returning alive from Iraq and Afghanistan, but with profound physical and emotional damage. One veteran an hour commits suicide.

“We want to show plainly a reality that’s harrowing,” Burns said. “It’s not easy to look at, but the message is hopeful.”

Well-known disabled veterans appear in the film including Congresswoman Tammy Duckworth, D-Ill., who lost both legs and part of an arm as an Army helicopter pilot in Iraq; J.R. Martinez, an Army veteran, actor (and winner of “Dancing With The Stars,”) who was severely burned in Iraq; as well as Vietnam vet Max Cleland, a former U.S. senator and Veterans Affairs administrator.

Scholars and military experts discuss the treatment of wounded soldiers from the Revolutionary War to the battlefield amputations of the Civil War to the shell shock of World War I returnees, which would now be classified as PTSD.

Burns hopes his documentary helps bridge the gap between military and civilian cultures, at a time when only 1 percent of Americans are in military service.

“Because most of us are so remote from military experience, it feels like an option to care or pay attention,” said Burns. “But no matter what war you do or don’t support, you can’t deny that obligation you owe to the men and women who served.”

In previous wars, the wounded were rarely visible in American society because so many died. Today, disabled veterans are living reflections of what war costs. A leg. Both arms. Head trauma. Young bodies forever broken.

“That’s what they gave. We need to see that,” said Burns.

And according to Pope, to understand the consequences of using lethal violence and decide each time whether it’s worth the price.

Howie Mandel Opens Up Ahead Of His Performance At The Mar-a-Lago Club In Palm...
Scroll to top