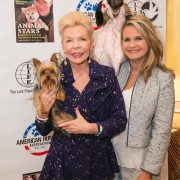 “Who wants the monkey?”

That’s the question of the day in the packed lobby of Palm Beach’sChesterfield Hotel, and the answer is almost always the same: “Me!”

Everyone wants the monkey.

And why wouldn’t they? Crystal the capuchin has arrived at this fundraiser —an afternoon tea benefiting theAmerican Humane Association — looking more fetching and feminine than usual.

Dressed in a flouncy, full-skirted dress and a strand of pearls, the monkey best known for playing Dexter in the “Night at the Museum” movie series perches delicately on the shoulders of animal lovers who’ve paid $150 to meet her.

Marianna Hurwitch, of West Palm Beach, (on left) and TJ Fisher, of Palm Beach, pose for photos with Crystal the monkey … Read More

With a cue from trainer Tom Gunderson, who’s guided her through a lengthy acting career that’s included appearances in more than 20 feature films (“The Hangover, Part II,” “The Zookeeper,” “We Bought a Zoo”), 30-plus TV shows, commercials, music videos and photo shoots, Crystal smiles, raises her arm and effortlessly charms her fellow primates.

Someone asks Gunderson if the little monkey can dress herself and change her own diaper.

No, he says. “If I could train her to change her own diaper, then I’d really be styling.”

Crystal isn’t the only animal star in the room. She’s sharing the spotlight with Hudson the Golden Retriever, who in 2012 played Mitt Romney’s dog on “Saturday Night Live.”

The 6-year-old, 70-pound pooch doesn’t miss a trick. As he strolls through the packed lobby, tongue out and tail wagging, his head swivels and his eyes dart around the room.

“He is so sharp,” says co-trainer Taylor Potter. “He knows when he’s working, but he also loves to be a dog. He has his moments, just like a kid.”

The tea, which took place earlier this month, was the final stop on a 12-city national tour celebrating the release of “Animal Stars: Behind the Scenes With Your Favorite Animal Actors,” written by American Humane’s CEO Robin Ganzert with Allen and Linda Anderson.

This year marks the 75th anniversary of the humane association’s on-set monitoring of animal actors. (They’re the group responsible for the “No Animals Were Harmed” disclaimer that appears in a movie’s end credits.)

In 2014, the nonprofit’s certified animal-safety representatives and veterinarians were on sets worldwide for a total of 4,000 days of production. “But we would like to be on reality TV sets,” Ganzert says. “We’re not there, which makes me nervous for those animals.”

“Animal stars like Crystal and Hudson bring such happiness to all who meet them,” Pope said. “Just like human celebrities, animal stars bring attention to a cause. There are so many helpless, abused and neglected animals in this world, the more supporters we can bring to our cause, the more we do to save and protect them.”

After greeting guests, Crystal seemed to enjoy sitting at a table in the Leopard Lounge and nibbling on sandwiches.

It wasn’t the first time Pope and the capuchin had met.

“It was more like a reunion between dear friends,” Pope said. “My only regret is that she wears pink and pearls so much better than I do.”

FIVE FACTS ABOUT CRYSTAL THE MONKEY

2. She measures a little under 2 feet tall and weighs just over 6 pounds.

4. She’s free to roam throughout the home of her human family but must follow three rules: Don’t steal, don’t destroy and don’t get on the tables and kitchen counters unless invited.

5. Crystal and her live-in capuchin friend, Squirt, have a few options of where to sleep each night. They can choose from a dog bed on the floor or a tiny hammock suspended from the top of their trainer’s bed. But their favorite spot is next to their human mom and dad — the monkeys love to cuddle!