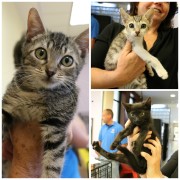 WEST PALM BEACH, Fla. —Peggy Adams Animal Rescue League has received a $200,000 grant from PetSmart Charities, which it said will help significantly increase the number of free spay and neuter surgeries available for owned and free-roaming cats in West Palm Beach and Lake Worth over the next two years.

According to a release, Animal Care and Control and Peggy Adams Animal Rescue League received 11,386 cats in 2014, nearly 2,000 of them specifically from Lake Worth and West Palm Beach.

“We are tremendously grateful for this generous funding from PetSmart Charities in support of our Countdown 2 Zero initiative to save the lives of animals here in Palm Beach County,” said Rich Anderson, executive director and CEO for Peggy Adams Animal Rescue League.

“Combating overpopulation is a big goal to work towards, but thanks to PetSmart Charities, we will significantly reduce the problem of homeless and neglected cats not only in these areas, but in our county as a whole.”

The grant is expected to help with over 4,000 surgeries.

Moving up: Wealth manager focuses on individual strategy for clients
Scroll to top