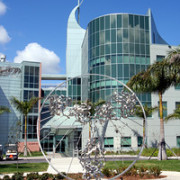 It was hard to imagine there wasn’t at least one future Nobel Prize winner among the Scripps Florida scientists who described their work diseases such as cancer, HIV and Alzheimer’s Tuesday.

About a half dozen researchers briefed a room full of elected officials at The Scripps Research Institute in Jupiter about their work and its implications for public health. Thomas Kodadek, chairman of the department of cancer biology, described a promising discovery that could help with treatment of leukemia and lymphomas. Another scientist talked about identifying a compound that restrains metastatic diseases, which could be significant for the treatment of breast cancer.

Michael Farzan, vice-chairman of the Department of Immunology and Microbial Science, elaborated on his team’s work to prevent new infections of HIV and other viruses such as the emerging dengue fever. But Department of Metabolism & Aging Chairman Roy Smith’s work with hormones to prevent the effects of aging seemed to be among the most popular with those assembled.

Smith said his discovery could keep people out of nursing homes. The restoration of hormone levels to those of a young person quickens recovery from broken hips, restrains the weight gain associated with cancer and improves resistance to illness. Smith’s product isn’t approved by the Food and Drug Administration yet, because the frailty associated with aging isn’t recognized by the FDA as a disease, he said.

Brock Grill, associate professor of neuroscience, emphasized the need for federal money to support the research at Scripps. The National Institutes of Health is the primary funding source, while philanthropy is a powerful second, he said. Budgets to federal agencies like NIH and the National Science Foundation have been heavily slashed lately, he said.

Many local and county officials attended the round-table Tuesday afternoon, along with a representative of Rep. Lois Frankel. Frankel, D-West Palm Beach, was called to a NATO meeting in Norway.