Blog - Latest News
You are here: Home1 / 80 dogs rescued from hoarder in Jefferson County; Some finding homes in... 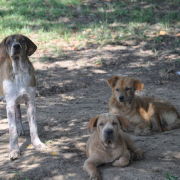 WEST PALM BEACH, Fla. — 80 dogs are being rescued from a dog hoarder in Jefferson County, according to Peggy Adams Animal Rescue Shelter in West Palm Beach.

7 of the 80 dogs have been brought to Peggy Adams with hopes of finding new, loving families to adopt them.

Rich Anderson, CEO of Peggy Adams Animal Rescue, says the 80 dogs were living outside and had to fend for themselves. Food was thrown at them but they did not receive regular care, according to Anderson.

The dogs range from 2 months to a couple of years in age.

The dogs will be checked by a veterinarian and could be ready for adoption in just a matter of weeks.

This is the second time this year that Peggy Adams has made room for dogs in a hoarding situation.

Anderson says about 20 dogs were brought to the shelter in April from a hoarder in the Acreage.

The Humane Society of the U.S says they expected to find about 30 dogs at the home in Jefferson County, but found much more.

“It’s one of the worst cases the Humane Society has ever seen and they do these rescue operations nationwide,” Anderson said.

Anderson says the area where these dogs were found is very rural, without a well established animal control to investigate these cases.

In Palm Beach County, he says, there are many more regulations in place to prevent this.

“A lot of things can happen under the radar in parts of the state where they just don’t have the facilities or the resources to enforce laws,” Anderson said.

Some of the dogs do have skin rashes and heart worms, which is typical for dogs left in these hoarding situations. Anderson says otherwise, they have great demeanors and will make good pets.

Some of the dogs are also being taken to Broward County and to other rescue shelters around the state that have extra room.

Why did National Enquirer heiress spend $10 million on a memorial?
Scroll to top