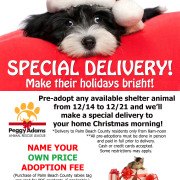 A group of volunteers plans to hit the streets Christmas morning to make a series of special deliveries to Palm Beach County homes: newly adopted rescue dogs and cats.

Christmas pet adoptions.
This pug is just one of the many dogs looking for a new home. For the first time, Peggy Adams Animal Rescue will make Christmas morning deliveries of pre-adopted dogs and cats. Those interested in surprising a loved one with a shelter animal must visit the shelter by Dec. 21. Photo by Scott… (scott fisher / s-s)
“This time of year is always a popular time for families to adopt a new pet, and we just thought this would be a really fun way to add to that excitement on Christmas Day,” said Rich Anderson, executive director and CEO of the West Palm Beach shelter.

Five vans filled with volunteers will fan out across the county between 8 a.m. and 12 p.m. to bring the animals to peoples’ doors. Jim Lilli, director of operations at Peggy Adams Animal Rescue League, will be among those playing Santa.

He said he’s excited about the drop-offs and happy to give up a few hours of his Christmas morning to pitch in.

“I think when we think back on our memories of childhood, we always remember Christmas Day, and you remember when you got your first pet,” Lilli said. “And how wonderful it is to have those two memories together?”

Anderson said the goal is to find families for as many animals as possible. To that end, the shelter is allowing people to “name their own price” for adoption fees, which typically start at $50.

The Christmas deliveries are free. But only a limited number are available, so those interested in surprising a loved one with a new four-legged friend are encouraged to move fast.

“There’s only so much room in Santa’s sleigh, as we say,” Lilli said.

While some animal advocacy groups once advised against giving pets as gifts, a peer-reviewed study by the American Society for the Prevention of Cruelty to Animals concluded there is no reason to believe they’ll be rejected or returned.

“Christmas is coming up, birthdays are every day, and dogs and cats in some shelters around the country are missing chances at homes,” ASPCA Vice President of Shelter Research and Development Emily Weiss wrote in a blog post on the topic. “So it’s time to put this myth to bed.”

Plus, Anderson said Peggy Adams Animal Rescue League requires anyone interested in giving a pet for Christmas to first visit the shelter and meet all adoption requirements. Staff spend time ensuring the match between owner and pet is one that will last, he said.

The shelter currently has more than 500 dogs and cats, with about 230 immediately ready for adoption.

“They’d be so much happier, they all would be, in a real home,” Anderson said.

Christmas Day deliveries are available to Palm Beach County residents who pre-adopt a pet by Sunday. Pre-adoptions must be done in person at the shelter located at 3100 North Military Trail in West Palm Beach, and paid in full before delivery. For additional information, visit PeggyAdams.org or call 561-686-3663.