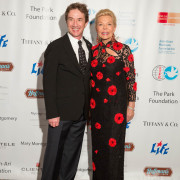 Shannon Donnelly
Daily News Society Editor
A side-splitting performance by former Saturday Night Live star Martin Short highlighted the 21st annual Lady In Red gala. “A Night in Shanghai” took place Dec. 6 at The Mar-a-Lago Club, which was transformed into a dramatic Asian scene from the enormous dragon suspended over the pool to the dramatic red and gold décor.

The night began with cocktails and food stations around the pool, covered with a clear tent so the light from the full moon could stream in. After cocktails, guests moved to the grand ballroom for Short’s performance.
Short lived up to his comic rep, reprising his roles in The Three Amigos – with the help from a few good-natured audience members — as Franc from Father of the Bride and Jiminy Glick doing an interview with a remarkably composed Toni Holt Kramer.
Lois Pope and Lola Astanova were chairwomen for the evening, which continued with dinner, a live auction and dancing to the Sultans of Swing.
Patrick Park and Dr. Robert Mackler were chairmen. Donald and Melania Trump were honorary chairman and honorary chairwoman.
More than 500 guests attended, including the military dog Matty, on her first media outing after returning from Afghanistan and her reunion with Spec. Brent Grommet.
Proceeds from the event assist the American Humane Association in its mission to protect “the voiceless and the vulnerable” — children and animals. Among its projects in Palm Beach County is the 50-foot-long Lois Pope Red Star Rescue Vehicle, which provides emergency rescue services for animals caught in natural disasters or in cruelty cases. The giant mobile response vehicle also provides adoption services and brings humane education into the schools.