Blog - Latest News
You are here: Home1 / Everybody needs a hero dog 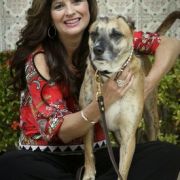 The baby was asleep on the floor of a Greensboro, N.C., home when Susie, an 8-week-old puppy, licked the infant’s face.

The child’s father went ballistic. For 15 minutes, he beat Susie. Broke her jaw. Knocked out several teeth. Then he dragged her outside, poured lighter fluid over her brindle coat and struck a match.

The puppy fled into nearby woods, where she died a little more each day. She’d suffered second- and third-degree burns over most of her body, and her ears were totally gone — burned down to nubs.

Ten days later, a man walking his own dogs through a park found Susie clinging to life.

A local animal shelter took in the pup and, over the next two months, she underwent skin grafts and scrub baths.

She was soon adopted by a woman who needed Susie as much as Susie needed a forever home.

“I had such compassion for her,” says Donna Lawrence, a High Point, N.C., hairstylist. “She was so little. I just thought, ‘Who could do this to this poor little dog?’”

“Susie and Donna are living proof that we can achieve the goals set before us and that we can make a difference,” says Delray Beach’s Lois Pope, whose LIFE Foundation presented the nationally televised Hero Dog award show and who personally invited Susie to attend her “Lady in Red” gala in early December.

The day before the gala, Lawrence recounted the story of how she and Susie saved each other while the two sat by the pool at Palm Beach’s Chesterfield Hotel (hero dogs travel in high style, after all).

In October 2008, while in the early stages of pregnancy, Lawrence was checking on her next-door neighbor’s dog, Smokey, a pit bull who’d lived most of his life tied to a tree. She fed Smokey, gave him fresh water, and as he ate, rearranged the bedding in his dog house.

Donna Lawrence and Susie, the 2014 American Hero Dog, pose with comedian Martin Short prior to the Lady in Red gala

With no warning, he rushed Lawrence from behind, sinking his teeth into her right ankle. “My first thought was he was playing,” she says.

But the pit bull then bit Lawrence below the knee, ripping into her flesh. Thrown to the ground, Lawrence began to panic. “I thought he was going to take my leg off.”

She kicked at Smokey with her left leg, but that only angered him. He lunged for her throat. She grabbed his collar in mid-air. He was able to bite her hand and began to chew on it. “I thought, ‘This dog is going to kill me.’ We had a real battle going on.”

A deeply religious woman who often prays with her salon clients, Lawrence cried out to God for help. She heard a voice say, ‘Throw him backwards and roll in the opposite direction’.”

The maneuver worked. Lawrence struggled to her feet as the voice told her, “Run! He can break the tether!”

Easier said than done. Smokey had torn ligaments in Lawrence’s leg, and she was on the verge of passing out. Willing herself to escape Smokey’s backyard, she was able to reach a neighbor’s house, where she collapsed after knocking on the door.

Rushed to the hospital, Lawrence required 45 stitches, couldn’t walk for two months and was out of work for almost three.

And, she lost her baby. Eventually, tests would show that the shock of the dog attack had thrown Lawrence’s body into early menopause. She would never be able to have children.

Even as her physical wounds healed, she continued to struggle with depression, suffer from nightmares and experience symptoms similar to those associated with post-traumatic stress disorder. “I was terrified of dogs, something I’d always loved,” she says. “If I would get around big dogs, I would shake.”

But when Lawrence met Susie a year after the attack, life got lighter. God spoke to Lawrence again: “It was like, ‘You see that dog? She’s not living in the past. She’s healing. She’s moving forward with her life, and so can you. I want you to adopt her’.”

Thanks to Susie, says Lawrence, “My fear of dogs left, just like that. No more nightmares.”

Three months after Susie was tortured, her attacker’s mother turned him in. But animal cruelty laws in North Carolina were so lax that the perpetrator didn’t face any jail time for almost killing Susie. “You could burn your neighbor’s couch and get more time than for burning a dog,” Lawrence says.

Susie became the name and face for “Susie’s Law,” which made animal cruelty a low-level felony and allowed sentences of up to 10 months in jail. (In Florida, animal cruelty cases can be classified as either a first-degree misdemeanor or a third-degree felony. The latter carries fines up to $10,000 and/or imprisonment up to five years.)

“Once the lawmakers saw Susie, it was hard for them to say ‘no,’” says Lawrence.

“Susie’s Law” went into effect in December 2010, a few months after Susie, wearing a strand of pearls, stamped her paw print on a bill signed by the governor.

Since her trip to the state capitol, Susie has maintained a full schedule. When not enjoying treats of peanut butter and chicken nuggets, she plays with the three dogs and seven kitties that share her home (“She loves cats,” Lawrence says). She accompanies Lawrence to work, and the pair visits schools, churches and nursing homes.

“She brings so much healing to people,” says Lawrence. “I’ve seen grown men cry when they see her.”

Susie’s also has been the subject of three books, and her story was made into a movie. And through the nonprofit Susie’s Hope, she continues to help raise awareness about animal abuse in its various forms.

As the American Humane Association’s reigning hero dog, Susie will make special appearances for the organization this year.

Lawrence says she once viewed Susie’s scars, which are still visible along the dog’s spine and on top of her head, as proof of evil in the world. Now, they symbolize hope and forgiveness.

“One pit bull almost took my life. The other one saved it.”

Crystal the capuchin, who starred in the “Night at the Museum” movies, “We Bought a Zoo” and “The Hangover Part II,” is headlining a Jan. 22 tea at the Chesterfield Hotel’s Leopard Lounge.

Appearing with Crystal will be Hudson, a Golden Retriever who starred in 2011’s “Our Idiot Brother” and who’s made frequent appearances on “Saturday Night Live.” Both Crystal and Hudson are featured in the new book “Animal Stars: Behind the Scenes with Your Favorite Animal Actors.”

Also, the AHA’s Be Humane Celebrity Luncheon will be held March 17 at Mar-A-Lago. Special guests will include the canine-human military teams that AHA has reunited over the past year.