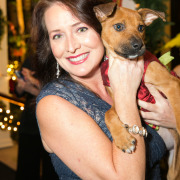 By Shannon Donnelly
Daily News Society Editor
In Palm Beach, a description of “tails” in a receiving line is usually accompanied by the words “white tie and”… unless the subject is the Animal Rescue League’s Christmas Ball.
The 43rd annual Doggie Ball, as it is affectionately called, took place Dec. 11 at the Sailfish Club and began with a receiving line of adorable adoptables — sweet dogs and cats from the Peggy Adams Animal Rescue League, vetted and adoption-ready.
Pauline Pitt, a longtime rescue league supporter and board member, was chairwoman of the event for the third year in a row.
The evening included a cocktail reception and shopping at the Shaggy Shoppe boutique, a second-look pet parade that led to several adoptions, dinner, dancing, and the fabled Publicity Hound ball program.
More than 300 people attended.
All proceeds from the evening support the Peggy Adams Animal Rescue League’s programs to provide shelter to lost, homeless and unwanted animals; to provide spay and neuter and other medical services for companion animals; and to support community involvement and education to further the bond between people and animals.
– See more at: http://www.palmbeachdailynews.com/news/lifestyles/doggie-ball-attracts-hundreds-to-support-peggy-ada/njbjd/#sthash.5mzRm9OR.dpuf

Everybody needs a hero dog