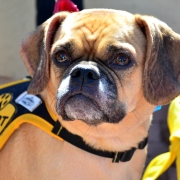 WEST PALM BEACH —Bahar Daryaee, 15, was not planning to take home a dog Saturday when she accompanied her mother to an adopt-a-thon .

But everything changed when she laid eyes on a blue-eyed, all-white husky. Her heart had been stolen by a walking and barking fluffy cloud.

The husky was one of more than 600 animals looking for homes during the Countdown 2 Zero adoption event, held from 10 a.m. to 6 p.m. at the Palm Beach County Convention Center.

Countdown 2 Zero is a collaborative effort between 30 local animal rescue centers with a combined goal of finding at least 300 dogs, cats, puppies and kittens homes.

The event, which was the first of its kind in Palm Beach County, was initiated by Palm Beach County Animal Care and Control, Board of County Commissioners and Peggy Adams Animal Rescue League.

The overall mission is to end euthanasia and make Palm Beach County a no-kill zone. Every year, more than 10,000 healthy pets are put down at the county’s shelter due to over-population.

Rich Anderson, executive director and CEO for Peggy Adams Animal Rescue League, attributes the problem to not enough animals being spayed or neutered.

“There are too many litters of kittens and puppies being born and not enough homes for them,” he said. “The objective is that by the year 2024, there will be no more healthy, adoptable animals losing their lives.”

Diane Sauve, the director at Palm Beach County Animal Care and Control, said in addition to a lack of sterilization, there is a problem with society often viewing animals as disposable.

“When situations change in a household, sometimes the first thought that people have is ‘Oh, I’ll just take it to the shelter and they will find a good home for it,’ ” she said. “But the reality is that we have over 20,000 unwanted animals a year coming in.”

During the event, hundreds of people peeked through cages, played with dogs and held kittens in search for the newest addition to their families.

Erica Cuascut, from Boynton Beach, had taken a pet break after her last cat passed away. While she thought she was the one deciding on a new cat, it was her that was chosen by a 5-month-old orange kitten.

He immediately clung to his new mother. He couldn’t get enough of her, as he cuddled lovingly toward every stroke she gave him.

“He’s so affectionate and playful,” Cuascut said. “I just fell in love with him.”

The event featured a “Take Me Home Zone” where every new parent received a gift bag stocked full of items such as toys, treats and an instruction guide on how to care for your new pet.

Each shelter featured its own discounted adoption fee. Furry Friends Adoption was placing animals for $25 instead of its usual $90 adoption fee and Peggy Adams held a “name your own price” special.

During the first four hours of the event, 176 pets were adopted. By the end of the day, that number surged to 313 lives saved.

It was clearly a success, said Sauve, who hopes to start hosting the event at least twice a year.