Blog - Latest News
You are here: Home1 / Heroes at ‘both ends of the leash’ honored for military se... 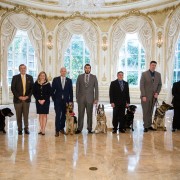 Handler and dog also forged a close bond during their seven months overseas in 2011: One photograph Caceres’ wife has shows the two snuggled up in a sleeping bag.

But after their service together ended, the pair had to part ways. Fieldy remained on active duty, while Caceres headed home to Texas. After three years apart — during which Caceres frequently called to check on Fieldy — they were reconnected in November. This time, their partnership is permanent: Caceres adopted the lab.

“You wait so long, and you don’t think it’s going to happen,” said Caceres, 28, who left the Marines in 2013. “Then the phone call comes and it’s just a little unreal.”

The reunion was partly made possible by the American Humane Association, which celebrated stories like Caceres’ and Fieldy’s during a star-studded luncheon Tuesday at the exclusive Mar-a-Lago club on the island of Palm Beach. The pair and four other military dog teams were honored at the event, put on by the organization with Palm Beach Countyphilanthropist and lifelong animal lover, Lois Pope.

At the luncheon, attendees mingled with the servicemembers and their dogs, noshed on lunch and listened to live musical performances. Retired Army 1st Sgt. Matt Eversmann, portrayed by actor Josh Hartnett in “Black Hawk Down,” spoke, and country singer Naomi Judd attended as a celebrity ambassador.

The event was also aimed at collecting donations for what American Humane Association President and CEO Robin Ganzert called “very important, groundbreaking” research: a study of the positive effects of service dogs on veterans suffering from post traumatic stress disorder. She said she hoped to raise $100,000.

Dogs play an important role for servicemembers both on and off the battlefield, from sniffing out explosives to being companions for those suffering the after effects of war, said Ganzert, who said there are “heroes at both ends of the leash.” She said it’s important to bring dogs that serve back to the U.S. and reunite them with their handlers, who are buoyed by the relationship, too.

“Words really can’t express what it means to them,” Ganzert said. “It’s tears; hearts full of joy. It’s about hope and healing. It’s about the utmost unconditional love.”

For Caceres, being separated from Fieldy was tough. He said he missed the dog, whom he’d cared for throughout his service after volunteering as a handler, and often told stories about him. He hoped to see him again, but thought, “You never know what could happen.”

Then came the phone call saying Fieldy had retired and was his. Caceres’ wife, Briann, said he couldn’t wait to pick him up.

“That smile on his face when he saw Fieldy coming down the steps at the airport — it was just like, ‘Wow,'” she said. “It was the biggest smile I ever saw him have. You could just tell they were meant to be together.”

A girl, a wagon and a war