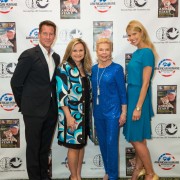 The American Humane Association, the country’s first national humane organization, recently honored philanthropist Lois Pope for her inspirational leadership, kindness, compassion and generosity in building a more humane world at a special “Gratitude” event at the Colony Hotel in Palm Beach.
Since 2011, Pope and Leaders in Furthering Education (LIFE) have partnered with American Humane Association on key initiatives such as the Red Star Rescue program that saves thousands of animals in disasters each year and the “Be Humane” conversation series in Palm Beach to focus on pressing humane challenges of the day, veterans’ issues and numerous National Humanitarian Medal events.
Animals in need up and down the Eastern Seaboard have an ally on their side thanks to two new 50-foot-long fully equipped Lois Pope Red Star Rescue Vehicles and dedicated Red Star teams – one dedicated to the animals of South Florida and the Southeastern United States, and one based in New Jersey for rescuing animals in the Northeast.
The trucks are outfitted with everything the rescue teams need to rescue and care for animals caught up in the worst natural and manmade disasters.
“We can think of no humanitarian making a greater difference for children, animals, and veterans than Lois Pope,” said Dr. Robin Ganzert, American Humane Association’s president and CEO. “Her unrivaled compassion is something to which every American can aspire. Our work would not reach a fraction of the people and animals as it does today without her generous support.”
Pope pledged $150,000 to American Humane Association to help its K-9 Battle Buddies program bring home military dogs and reunite them with their hero handlers, and underwrote a special float in the Veterans Day parade in New York City to spotlight the achievements of these military heroes.
The country’s premiere tribute to heroes on both ends of the leash is televised every year on Hallmark Channel and has taught millions of Americans about the important role dogs play in our lives by keeping us safe, happy, and healthy.
Hero Dog Awards hosting duo James Denton and Beth Stern attended the “Gratitude” event to show their appreciation for Mrs. Pope.
“American Humane Association has been the leading voice in the humane movement since the beginning, and it has been an honor to partner with them on so many key initiatives,” said Mrs. Pope.
Pictured : James Denton, Dr. Robin Ganzert, Lois Pope and Beth Stern at The American Humane Association’s recent “Gratitude” event honoring Lois Pope. Photo by Capehart

Heroes at ‘both ends of the leash’ honored for military service