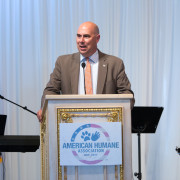 Friends and supporters of the American Humane Association’s K-9 Battle Buddies Program turned out for a lunch honoring Heroes on Both Ends of The Leash.
The event took place March 17 at The Mar-a-Lago Club.
Lois Pope was chairwoman for the afternoon, which included appearances by country music legend Naomi Judd, “America’s Veterinarian” Dr. Marty Becker, retired four-star Army Gen. Peter Chiarelli, and Matt Eversmann, a retired Army sergeant and one of the heroes of the Battle of Mogadishu whose story was portrayed by actor Josh Harnett in Blackhawk Down.
Honored were Marines Sgt. Matt Hatala and Chaney, who served multiple tours together in Iraq and Afghanistan; Col. Jeff DeYoung and Cena, who served together in Afghanistan; Cpl. Jonathan Cavender, and Maxi, who served together in Japan; Cpl. Nick Caceres and Fieldy, who served together in Afghanistan; and Army Spec. Brent Grommet and Matty, who served together in Afghanistan, where Grommet was wounded by a roadside bomb.
The event, emceed by Alex Donner, also included performances from American Idol’s Stefano Langone, the vocal duo of Will and Anthony Nunziata, and the Alex Donner Orchestra.
Proceeds benefit the Battle Buddies initiative. For more than a year, Pope and her LIFE Foundation have worked with the American Humane Association to bring military dogs to the United States, where they can retire to lives with their former military handlers.

Photo on cover: Matt Eversmann, a retired Army sergeant & one of the heroes of the Battle of Mogadishu