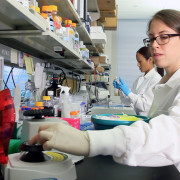 PGA National Women for Cancer Awareness recently presented Scripps Florida, a division of The Scripps Research Institute, with a donation of $148,000 to support scientific trainees in the Department of Cancer Biology.

The funds were raised earlier this year over three days of exciting PGA Nationalcommunity events, which is entitled PGA National Women’s Cancer Awareness Days(WCAD). Launched in 2004, Women’s Cancer Awareness Days bring together 1,000 men and women who aremaking a difference in the lives of those who have faced or who currently suffer from cancer.
“PGA WCAD monies will continue to support five WCAD Postdoctoral Fellows,” said Dr. Tom Kodadek, Professorand Chairof the Department of Cancer Biology. “We are tremendously grateful for the impressive fundraising efforts and for the important and continued support of these five outstanding young investigator trainees in Cancer Biology.”
This was the fourth year of fundraising to benefit cancer research programs at Scripps Florida. Dr. Tom Kodadek is confident Scripps Florida scientists will continue to discover new drug targets and make progress toward new cancer treatments thanks to this type of support.

About The Scripps Research Institute
The Scripps Research Institute is one of the world’s largest independent, not-for-profit organizations focusing on research in the biomedical sciences. Over the past decades, Scripps Research has developed a lengthy track record of major contributions to science and health, including laying the foundation for new treatments for cancer, rheumatoid arthritis, hemophilia, and other diseases. The institute employs about 3,000 people on its campuses in La Jolla, CA, and Jupiter, FL, where its renowned scientistsâ€”including two Nobel laureatesâ€”work toward their next discoveries. The institute’s graduate program, which awards Ph.D. degrees in biology and chemistry, ranks among the top ten of its kind in the nation. For more information, see www.scripps.edu.