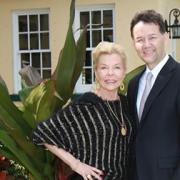 Friends and supporters of LIFE will gather at the Mar-a-Lago Club Dec. 6 for the 21st annual “Lady in Red” Gala, themed A Night in Shanghai, for an adventurous evening.

The evening will begin at 6 p.m. with cocktails under the full, late-autumn moon, which will include a silent auction, a vodka luge, caviar and an ice sculpture courtesy of The Park Foundation, Patrick M. Park. Cocktails will be followed by dinner, a live auction offering items including jewelry donated by Tiffany & Co. and dancing with the Sultans of Swing.

Co-chairs of the evening are Lois Pope, Dr. Robert Mackler and Patrick M. Park. Honorary Chairs are Melania and Donald Trump. Guests will be entertained by comedic legend Martin Short. An informal meet and greet reception with Short will take place at 6 p.m.

Short, a celebrated comedian and actor, has won fans and accolades in television, film and theater since his breakout season on Saturday Night Live almost 30 years ago. He won his first Emmy in 1982 while working on Canada’s SCTV Comedy Network, which brought him to the attention of Saturday Night Live producers. He became a fan-favorite for his portrayal of characters such as Ed Grimley, lawyer Nathan Thurm and songwriter Irving Cohen.

His popularity and exposure on Saturday Night Live led Short to cross over quickly into feature films. He made his debut in Three Amigos and followed with Inner Space, Three Fugitives, Clifford, Pure Luck and Tim Burton’s Mars Attacks. One of Short’s most memorable roles was in the remake of Father of the Bride, as Franck the wedding planner, a role he reprised a few years later in Father of the Bride Part II. Short was also featured in the animated film Madagascar 3 and the Tim Burton film Frankenweenie.

Most recently seen on the CBS hit comedy series How I Met Your Mother in the recurring role of Garrison Coote, Short is currently starring in the first season of the new FOX series Mulaney.

All proceeds from the evening will benefit LIFE’s partnership with American Humane Association (AHA), which includes a program to protect the voiceless and the vulnerable in society – children and animals.