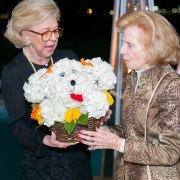 The reception took place Nov. 19 at Pauline Pitt’s lakefront home and served as a thank you for the major supporters of the Animal Rescue League and the gala.

The evening included cocktails, hors d’oeuvres, music and the announcement that Grace has been named honorary chairwoman emeritus of the board, in perpetuity, in recognition of her decades of support.

Grace and husband Robert funded the Grace Pavilion, which opened in 2010 and is critical to the league’s goal to provide high-volume spay-and-neuter services to remedy the problem of pet overpopulation in Palm Beach County.

Proceeds from the ball assist the Peggy Adams Animal Rescue League in its mission “to provide shelter to lost, homeless and unwanted animals; to provide spay and neuter and other medical services for companion animals; to care for, protect, and find quality homes for homeless and neglected companion animals; and to advocate animal welfare, community involvement and education to further the bond between people and animals.”