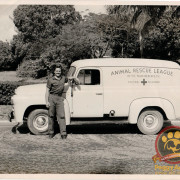 Operating continuously since 1925, the rescue league functions as a humane society that last year provided services to more than 28,000 dogs and cats. It is the largest private animal shelter in Palm Beach County.

Peggy Adams “promotes the vision to create a community where 100 percent of the adoptable animals find loving homes and no animals will be euthanized because of pet overpopulation,” Coniglio wrote in her proclamation.

The rescue league has strong ties to the town. Many of its board members, donors and supporters live in Palm Beach.

In 1924, eight women met at the home of Amy Lyman Phillips in Palm Beach to decide what to do about the ongoing problem of animals left behind by winter visitors returning north. The rescue league emerged from that meeting and was incorporated a year later.

Its original shelter was a modest structure on the grounds of what is now the Palm Beach International Airport. Flattened by the hurricane of 1928, it was rebuilt with donated dollars and volunteer labor.

The shelter has moved and expanded several times since its founding, most recently into a state-of-the-art clinic and adoption center named after Palm Beach residents Jane and Robert Grace.