Blog - Latest News
You are here: Home1 / Paws Up for Pets: Philanthropist ensures that military dogs have their... 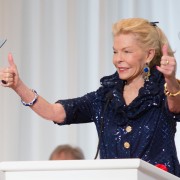 Hundreds of military men and women fighting in Afghanistan owe their lives to dogs answering to the names of Fieldy, Isky, Bond and Matty. And philanthropist Lois Pope is making sure that these military dogs — as well as those that served in past conflicts and those to serve in future ones — will never be forgotten.
Working with American Humane Association officials, Pope, a Manalapan resident and founder of the Lois Pope LIFE Foundation, is launching a coast-to-coast campaign to create the first American Military Hero Dog Monument to be built in Washington, D.C.
But she isn’t stopping there. She also recently honored Fieldy, Isky, Bond and Matty as recipients of the inaugural American Humane Lois Pope LIFE K-9 Medal of Courage in a ceremony held on Capitol Hill.
“The sad fact is that our military dogs are easily forgotten,” says Pope. “They don’t come home to parades down Main Street. It is estimated that each American military dog saves the lives of 150 to 200 American soldiers. I knew I had to do something to honor them.”
Robin Ganzert, president of the American Humane Association, adds, “Soldiers have been relying on these four-footed comrades-in-arms since the beginning of organized warfare. Today, military dogs are more important than ever in keeping our service men and women safe.”
Let’s take a closer look at these four canine heroes and their human partners:
Isky is a 6-year-old German shepherd who teamed up with Army Sgt. Wess Brown in 2012 in Berlin, where they made sure that the hotel where President Barack Obama was staying was free of any bombs. In 2013, the pair was deployed to Afghanistan, where Isky was on task to sniff out deadly  improvised explosive devices and hidden weapons. One of his biggest finds was a 120-pound bomb.
“Together, we had about 30 IED and weapon finds, but the 120-pound bomb was the biggest,” says Brown, now living in Catlett, Va., and in the processing of retiring after serving 10 years.
Unfortunately, Brown and Isky were wounded during a combat patrol, requiring the amputation of Isky’s right front leg to save his life. Isky now serves as Brown’s post-traumatic stress disorder service dog.
“In combat and now today, the intuition between us is strong,” says Brown. “We seem to be able to read each other’s minds without speaking a word. We are lucky to come back together and be responsible for helping a lot more people to come back home to their families.”
Fieldy is a nearly 9-year-old black Labrador retriever who served four combat tours in Afghanistan as a bomb detection dog. He was paired up with four handlers, including Marine Cpl. Nick Caceres. The pair clicked so well that Caceres worked nearly three years to be able to adopt Fieldy when his military duties ended.
“He would go off leash and sniff for bombs about 100 to 200 yards in front of me with everyone else in our unit behind me and out of harm’s way,” recalls Caceres, who served four years and is now a federal game warden in McAllen, Texas. “I have a lot of pride in being a Marine and in being a dog handler, so I feel doubly blessed. Today, Fieldy lives with us and our chocolate Labrador named Bailey. He has and always will have my back.”
Matty is a 6-year-old German shepherd paired with now-retired Army Spc. Brent Grommet as a bomb detection team in Afghanistan. During an enemy ambush at a bazaar, the duo raced to clear a helicopter landing zone of IEDs to escort out the wounded. They returned to the front line and were hit with a rocket-propelled grenade that injured and knocked them both out.
They were flown stateside for medical treatment, but then after they recovered, it took Grommet about 18 months to find and adopt Matty. Today, they live in De Soto, Mo.
“Matty helps me every day as my mobility and PTSD dog,” says Grommet. “Having Matty has helped me to be able to be independent again. He is a loving dog, smart and mischievous at times. He is always happy and ready to go at a moment’s notice.”
Bond is a Belgian Malinois who completed more than 50 combat missions during his three tours of Afghanistan. He was partnered with a still active-duty Special Operations Unit serviceman whose name is not being revealed for security reasons. With the help of the AHA, Bond was recently reunited with his handler, who is in the process of returning to civilian life.
After learning about these brave military dogs, Veterans Day on Nov. 11 will carry more meaning to me. And I hope to you, too.
“Veterans Day is one of the most important days on our calendar,” says Pope. “I created the American Veterans Disabled for Life Memorial, the nation’s first and only permanent public tribute to the 4 million living disabled American veterans and all those who have died. Similarly, we need to recognize the heroism of our military dogs. These dogs have done so much to protect our freedoms, as well as their human soldiers.”
As an animal advocate and proud member of a military family, I couldn’t agree with you more, Lois Pope.

Learn More
Designs for the American Military Hero Dog Monument are being accepted until Dec. 31. A panel of judges will choose the finalists, whose designs will be unveiled at the American Humane Association’s annual Palm Beach luncheon on March 8.
To learn more, visit the Lois Pope Life Foundation Inc. at www.life-edu.org and the AHA’s site at www.americanhumane.org/program/military.

Hospice foundation prepares for a ‘timeless’ evening
Scroll to top