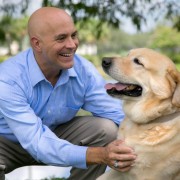 If anyone knows it’s a dog-eat-dog world, it’s Rich Anderson, CEO of Peggy Adams Animal Rescue League. Anderson has had to bear witness to some of the worst atrocities people can conjure up against some of our most defenseless creatures. Fortunately, he gets to be there for the good stuff, too.

The 45 year-old West Palm Beach resident tells a story about Biscuit, a dog rescued after someone tossed him over a bridge.

“A good Samaritan rescued him and brought him to us; he was just a puppy at the time with terrible scars of what clearly was an abusive environment that he came from,” said Anderson.

Biscuit was adopted, but as Anderson says, adoption is never the end of the story.

“About week or so ago I saw him. He was coming in for a vaccination — just to see him as happy as can be is a great feeling. I get to see wonderful stories everyday.”

Wonderful stories that don’t just include the dogs, but, said Anderson, people.

“It’s not just about benefiting the animals,” said Anderson. “We’re benefiting the people in the community bringing these great pets into their lives.”

Vaccination clinics, spaying/neutering, and obedience training are just some of the services the League offers to help ensure adoptees and their families can live happily ever after in their forever homes.

Anderson has nearly 25 years in the nonprofit sector, collecting such stories. Beginning with the American Red Cross National Headquarters in Washington, Anderson also served as development director for the Humane Society of Broward County and as a consultant for the ASPCA; North Shore Animal League; and World Society for the Protection of Animals.

When an opportunity became available at Peggy Adams, he jumped at the chance, joining it in 2011.

“I couldn’t resist,” said Anderson. “There’s so much potential to do amazing things at the local level with the League, but also to build an organization that’s seen as one of the finest animal welfare organizations.”

Some things he said he sees in the League’s near future is a program that will connect nursing homes, schools and other groups looking for therapy dogs.

For now, the League continues its work.

According to its website, in 2013 3,652 animals were placed into adoptive homes, the clinic performed 10,337 spay and neuter surgeries, helped 9,530 animals receive vaccinations and gave 759 people and their pets free training classes. The League also has reunited 262 lost pets with their families.

They have some lofty goals, one initiated along with Palm Beach County Animal Care and Control and the Board of County Commissioners is Countdown 2 Zero which aims to end the end the euthanasia of adoptable animals in Palm Beach County by 2024.

On Sept., 6, the Countdown 2 Zero countywide adoption event takes place at the Palm Beach County Convention Center, 650 Okeechobee Blvd., in West Palm Beach, from 10 a.m. to 6 p.m. It will bring together more than 30 animal rescue organizations with the goal of adopting 300 animals. For more information visit, Countdown2Zero.org or call Peggy Adams, 561-686-3663.

What’s on your nightstand? “John Adams” by David McCullough and “The Bond: Our Kinship with Animals, Our Call to Defend Them” by Wayne Pacelle.

What’s your guilty pleasure? Fried clam cakes: a fried, doughy, fritter-type treat from my childhood days in Rhode Island that I make on occasion. I can eat a dozen with ease. Golf. I’m terrible at golf and feel guilty committing four-plus hours to a round of golf, but I love to play. Facebook and Twitter. Some people thinks social media is a waste of time, but I think Facebook is one of the best ways to stay connected with old friends, classmates and colleagues around the country; and Twitter is a great source of instant news and information on endless topics — and both are very effective ways to spread the word about animals in need of new families here in Palm Beach County.

If you could have dinner with anyone, who would it be? My wife and daughters. We cherish that time — almost every day.

Who do you admire most? In today’s world, I admire people who are compassionate and selfless. People who are actively helping to improve the lives of others — people and animals.

What’s playing on your iPod? U2, everything from Johnny Cash to Linkin Park, Macy Gray to Carrie Underwood, Andrea Bocelli to Bruno Mars, Queen to Lady Gaga. I’m all over the place.