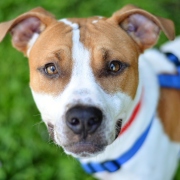 WEST PALM BEACH — The Watts family already has two ducks, seven turtles, a cat, two hermit crabs and a recently rescued blue jay, but when looking for a dog (or two) to add to the mix, they went to Peggy Adams Animal Rescue League on Sunday.

They went to the right place.

Snap, a 4 month-old domestic short hair cat, looks through a window at Peggy Adams Animal Rescue League, Sunday, May 10, 2015. Peggy Adams is waiving adoption fees this weekend in an effort to encourage people to come in an adopt one of the 800 animals, including Snap, that are currently in their care. “We’re hoping that people will consider adoption as their first option when they’re looking for their next pet,” said Executive Director and CEO Rich Anderson. (Damon Higgins/The Palm Beach Post)

The Wattses — Kenneth, Angela and 8-year-old Karmela — are planning to move from Central Florida to a 30-acre plot in Tennessee, so they feel like they have room to expand the clan.

“Animals are family,” Angela Watts said. “You make them your own, and they never do you wrong.”

Scooby, a 13 year-old, 63 lb. mixed breed, rests inside his cage at Peggy Adams Animal Rescue League, Sunday, May 10, 2015. Peggy Adams is waiving adoption fees this weekend in an effort to encourage people to come in an adopt one of the 800 dogs and animals, including Snap, that are currently in their care. “We’re hoping that people will consider adoption as their first option when they’re looking for their next pet,” said Executive Director and CEO Rich Anderson. (Damon Higgins/The Palm Beach Post)

Although Peggy Adams CEO Rich Anderson has seen countless animals get adopted over the years, he still gets a warm, fuzzy feeling when he sees a dog or a cat find a home.

The shelter normally gets about 10 adoptions a day, but they already had 59 through Friday and Saturday and officials were hoping to push that number to 100 before the event ends at 6 p.m. Sunday.

As the adoption numbers surge, it allows the shelter to bring in more animals to continue the cycle, giving them a chance to find homes as well.

“When you adopt, you’re actually saving the lives of two animals,” he said.

But with the massive pet population, Anderson said the most important thing someone can do is to spay and neuter.

The shelter plans to perform about 15,000 spay-and-neuter surgeries this year to try to keep the population under control. With the shelter’s planned expansion during the next five to seven years, officials hope eventually to get that number up to about 25,000.

One reason they organized the adoption event is because with the cat-breeding cycle, they have an influx of animals this time of year.

If everyone spays and neuters their animals, unwanted litters of kittens or puppies will be a much smaller issue, he said.

They also spay and neuter stray cats, so Anderson advises people to call the shelter if they see strays wandering near their homes or offices.

Something else that’s helpful is finding volunteers to act as foster parents.

Peggy Adams has about 350 cats in foster homes that are either too young for spay-and-neuter surgery or are recovering from another procedure. That program gives the animals a loving home environment and frees up space to bring more into the shelter.

Anderson is looking for more foster volunteers for both cats and dogs. He said it’s a good opportunity for younger kids to learn responsibility of caring for animals.

Shelter organizers also recently started another foster program in which a person houses a cat or dog and takes it upon themselves to find the pet a new home. He’s hoping the new program will free up additional space.

Ultimately the hardest part of the job for Anderson is not being able to help when he watches cats and dogs stay in the shelter for months. All of the workers sometimes get the urge to adopt, but seeing them find good homes is what it’s all about.

“It’s an incredibly rewarding job for all of us,” he said.