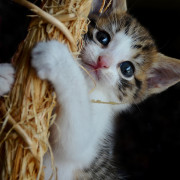 Bottle feeding in the middle of the night. Toilet training. Round-the-clock cuddling.

That’s life with baby — when you’re helping to raise a tiny kitty.

Fostering newborn kittens is not an easy job, but it’s certainly a labor of love for many South Florida volunteers. And as the unofficial kitten season went into full swing in April, these foster parents are working overtime.

“Kittens are coming in fast and furious. People need to understand the need to open their hearts and homes to these animals,” said Niki Gottesman, foster care coordinator for the Peggy Adams Animal Rescue League in West Palm Beach. “We sometimes are talking life and death, if we take in a tiny kitten that needs someone who can start bottle feeding them right away.”

On a recent Sunday, the nonprofit took in 18 kittens younger than 2 months old, including five that hadn’t yet reached 2 weeks and were unable to eat on their own.

“We have kittens all over the place right now,” said Dianne Sauve, director of Animal Care and Control. “People will just walk in with a mother cat and her newborn kittens and say, ‘Here, I don’t want them.'”

Cats’ pregnancy cycles are tied to warmer temperatures and, unlike dogs, they often have multiple litters annually, animal welfare advocates say. Cats can start having babies when they are as young as 4 months old. That means animal shelters and rescue groups will be flooded with kittens until late summer.
Last year, the county shelters in Broward and Palm Beach counties took in almost 8,990 kittens and cats in April through July, the four peak kitten season months. By comparison, the 2014 four-month winter total, for January through March plus December was about 1,980, according to county statistics.

Rescue groups say they desperately need kitten foster families this time of year, as shelters are overwhelmed and don’t have enough staff to give newborns the intensive care they need.

“It makes you feel really good to know you have some small part in saving their lives,” said volunteer Karen Goebel, 43, who along with her husband runs a yacht shrink-wrapping business out of their Fort Lauderdale home. “When people ask me what’s involved with being a foster, I tell them, ‘Just your time and your love.’ ”

One of her favorite foster duties is giving her kitties the names that are used on online adoption postings. Goebel said she tries to come up with “interesting, good names that will make a family or a child stop when they see it on a website.”

She’s delighted, she said, that every one of the 60 kittens she’s raised in the past 2 1/2 years quickly found a loving home.

Both Animal Care and Control and the animal rescue league, along with Broward County Animal Care and Adoption, offer training for prospective kitten foster parents. During the “kitten season,” the league has increased its bottle feeding and fostering class from two to four times monthly.

Potential foster parents are interviewed, and there may be an application process. They are unpaid volunteers. Animal agencies usually provide supplies and free medical care, although many foster parents buy the food, litter and other items as a donation.

During foster training, potential pet parents can learn how to feed kittens (those younger than 2 weeks old usually need kitten milk replacement formula given through a tiny bottle), keep them clean and potty train them.

Once the animals are about 8 weeks old and have reached about 2 pounds, they are ready to be sterilized and put up for adoption, said Krystal Mapp, volunteer coordinator for Broward Animal Care and Adoption, which currently has 188 animals in foster care. Only eight are dogs, Mapp said.

Fostered kittens — adorable plus healthy and happy — usually are snapped up, said Mapp.

The vast majority of foster kittens are born to “community cats” that live on their own outdoors. That means their babies have little contact with humans, which could make them feral, skittish and less adoptable as they grow older.

The animal rescue league’s Gottesman warns Good Samaritans who spot kittens crying in the underbrush or a secluded spot to leave them there, however, as their mother may just be out hunting or moving her litter.

Foster parents must “socialize” their kittens, getting them accustomed to human contact by constantly holding them, playing with them and comforting them when they wake up whimpering.

Gina St. George, a volunteer foster parent with the nonprofit rescue group Cat Crusade in Fort Lauderdale and other animal welfare organizations, has a collection of fashionable scarves that double as cat hammocks — allowing her to strap a sleeping kitten close to her chest for warmth and comfort.

“Sometimes I’ll be in a store, wearing a scarf, and suddenly the kitten’s head will pop up,” said St. George, of Fort Lauderdale. “Shoppers will say, ‘Wow, I didn’t know there was a cat in there!'”

Toys, food bowls, beds, heating lamps and pads, and litter boxes crowd foster parents’ homes, and sometimes their work places, if they have a job that keeps them away from home. That’s because the littlest kittens initially must bottle feed every two to four hours, and even older kittens do better with extra supervision.

During a typical Thursday at work, St. George — managing director and partner of CopyScan, a legal document management company based in Fort Lauderdale — had a kitten crawling out of her briefcase and three more, including one being weaned off his bottle, scampering around her office. She calls her fosters “Copy Cats” and posts their photos on her company’s web page.

“My staff probably thinks I’m a little crazy,” she said. “If I had a regular job, my employer might not like it if I was bringing kittens to work.”

Tami Schreurs, of Boynton Beach, also keeps her foster kittens at work, as she’s involved with her family’s business. This month, she has three dark gray, tiger-striped brothers she named Pugsley, Fester and Gomez, after characters from the 1960s TV show, “The Addams Family.”

The siblings took turns plunging their tiny faces into a soupy bowl of cat food on her office floor, then started a spirited wrestling match. One — Gomez? Fester? — energetically attacked Schreurs’ shoelace.

“You get to play with kittens all day. What could be better than that?” said Schreurs, a foster volunteer with the Peggy Adams organization.

Despite the fun, Schreurs never forgets the depressing reason that kitten foster parents are needed: too many homeless, unsterilized animals. And too many pet owners think nothing of dumping their cats when they move or just grow tired of them, she said.

“I am a foster because it seems to be where animals need the most help,” said Schreurs, who also volunteers for a program that traps, neuters and vaccinates homeless cats, then returning them outdoors. “Along with kitten foster parents, we need people to help stop cats from being born.”

How to foster a kitten