Blog - Latest News
You are here: Home1 / Off the Leash party for Peggy Adams paws-itively fun 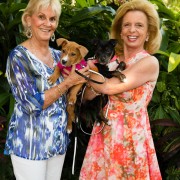 This is what happens when you let ‘em off the leash at Club Colette: They hardly sit, the paws are on the bar, there’s nothing around the neck, they’re shaking their tails on the dance floor and, at the end of the night, at least one person goes home with a hound.

No, we’re not talking about the dogs.

But they had fun, too.

The Off the Leash party, a benefit for the Peggy Adams Animal Rescue League was casual and perfectly timed after a season of black tie and evening gowns. That’s why the annual Off the Leash party has been a sellout from its very beginning in 2013.

Nellie Benoit, Carol Garvy, Laurie Raber-Gottlieb and Joanie Van der Grift — board members all – were chairwomen of the event, which took place March 29 at the private dining club.

The night included cocktails, a meet-and-greet with some of the league’s animals in need of forever homes, dinner and dancing.

Proceeds from the event, more that $350,000, will assist the league in its mission to provide shelter to lost, homeless and unwanted animals; to provide spay and neuter and other medical services for companion animals; to care for, protect and find quality homes for homeless and neglected companion animals, and to advocate animal welfare, community involvement and education to strengthen the bond between people and animals.

70th Anniversary of the end of WWII Author recounts growing up in World War...
Scroll to top