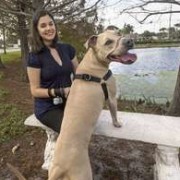 Saturday, March 5, 2016
Peggy Adams Animal Rescue League’s Walk for the Animals is March 12 at Downtown at the Gardens.

PALM BEACH GARDENS — Biscuit, a caramel-colored mutt with a square face and energetic personality, has been through a lot. The scars around his jaw are the evidence.

His life now is much easier than when he was thrown over the side of a bridge into the Intracoastal Waterway in Fort Lauderdale as a puppy in August 2013. A bridge tender spotted him, and the tender’s boss was married to someone who worked at Peggy Adams Animal Rescue League.

Veterinarians treated Biscuit, and he was ready for adoption after three or four weeks.

Biscuit will be the first mascot of the shelter’s yearly Walk for the Animals 10:15 a.m. March 12 at Downtown at the Gardens. There will be festivities from 9 a.m. to noon at the shopping center at 11701 Lake Victoria Gardens Ave. in Palm Beach Gardens.

Biscuit was a “sweet, sweet puppy,” despite the abuse he’d experienced, Peggy Adams Animal Rescue League CEO Rich Anderson said. The shelter staff believes the scars on his snout were caused by an aluminum can wrapped around it so he couldn’t bark.

“After the initial shock of coming here and having the vets treat his wounds, he quickly opened up and became a favorite of our staff and volunteers,” Anderson said.

He’s right at home now in Royal Palm Beach with Allie and Kevin Quigley, their four-year-old daughter Mia, and two other rescue dogs. He loves to cuddle, just like a human.

Mia’s a big fan of the Doc McStuffins Disney cartoon and will practice using her stethoscope on his chest, Allie Quigley said during a visit to the shelter Friday afternoon.

When Mia had a difficult time crawling up on her parents’ bed when she was younger, Biscuit availed himself as a stepping stool.

Thousands of other beloved family pets — and not just cats and dogs — will join Biscuit at the walk to raise money for Peggy Adams’ day-to-day expenses caring for the animals.

“We might even see some birds or lizards or snakes. We’ve even seen goats at the event,” Anderson said. “It’s just a wonderful day.”

Pets from Peggy Adams and Palm Beach County Animal Care & Control will be there for adoption. The event from 9 a.m. to noon includes pet contests, pet agility and demonstrations, and music and entertainment.